To dear our director…

On December 11th, 2020, director of company I worked at, who stand for this company from the first departed this world for another. “It was way too sudden…” I thought to myself, as I am still in disbelief.

The news came in on the afternoon of December 11th. I received a message from Alfian through company’s chat group. Alfian is my closest working partner who also worked closely with our director during work from home due to COVID-19 soaring across entire world. I just so happened to be took a break for fresh air after online meeting with client, I was picking on my phone, and open some news feed. Because of that, I noticed the messenger app notification right away, and the moment I saw the first text line, a heavy “hah…” audibly slipped out of my mouth.

Couple hours before, Mas Agus also send some snap on our company’s group, inform us that our director need an intensive care in hospital.

The last time I spoke with our director through phone call was December 9th, so only few days passed since then. When he told me “my signal is poor” and told “unable to work within next couple days and so on” because of this. I responded and give some advice to get wireless extender from online market or connect through cable. Earlier, he told me that some office applications on their MacBook Pro troubled and request password to log in. He want to send it to me within couple days for repair.

I first came to know him six years ago, on early of July 2014. I had been interviewed as technical support for company by him. He is a director from the first and made a statement “it would be good if you can join us next week”. It only means I officially joined company starting next couple days after that.

As long as I know, he was the kind of person who liked to find the good in any situation and wanted to be kind to as many of the people in the office, even with far adrift difference generations. In some moment years ago, he told a joke that wasn’t funny for me and others (age or generation difference matter) but all of us was laugh loudly. Not because of joke matter but the way he said to us. Because of this and that, all personnel in our company so close to each other even to director. I clearly remember a moment right before November this year, he told us to keep in contact and if we need anything from him, just call and come to him, do not hesitate to bother him.

I can remember this as if it just yesterday, but I am not able to see him anymore.

Come to think of it, I never received the Mac from him, unable to repair it for him, and send it back to him.

Once time passes, he will find me with some handy tools on my bag, saying: “Oh, you must be a late person! I don’t need to repair my Mac again, all of my account passwordless, and everything is well here”. In a place with good weather, nice folks, nice scene, and everything.

Rest in peace, pak Ismu. You did really well.

This site uses Akismet to reduce spam. Learn how your comment data is processed. 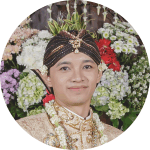